In the past month I’ve started off 2017 right when it comes to comics! A total of five volumes on four titles: couple series enders, the beginning of one, and volumes one and two of another. Here’s brief recaps/reviews for all of them!

In the early hours after Halloween of 1988, four 12-year-old newspaper delivery girls uncover the most important story of all time. Suburban drama and otherworldly mysteries collide in this smash-hit series about nostalgia, first jobs, and the last days of childhood.

This strange little story of four newspaper delivery girls was a much needed breath of fresh air. Inventive, witty, with plenty of science fiction to boot. I will say that a number of moments left me confused and it took me a bit to wrap my head around everything happening in the suburbs of Cleveland. I definitely enjoyed all the craziness that ensued though.

The smash-hit series from BRIAN K. VAUGHAN and CLIFF CHIANG continues with a bold new direction, as intrepid young newspaper deliverers Erin, Mac, and Tiffany find themselves launched from 1988 to a distant and terrifying future…the year 2016.
Collects PAPER GIRLS #6-10

While I struggled a bit with the first one I was all in for Paper Girls Vol. 2. The characters were hella fierce and I loved how Erin interacted with her future self. The second one seemed to have more direction with the search for one of the four girls and I was better able to keep up with events this time around. I’m anxiously awaiting the next installment now.

The Black Canary world tour begins here! But instead of playing sold out areas, the band is scouring the globe in search of their missing lead singer, Black Canary herself.

Following the rockin’ conclusion of Black Canary, Volume 1: Kicking & Screaming, Dinah Lance has disappeared and now she finds herself in the clutches of a mysterious white ninja who might have more in common with the Canary than anyone expected. In this continent-spanning adventure, secrets from Dinah’s past are revealed, questions about the future of the Black Canary band are answered and faces are melted with epic rock ‘n’ roll and action brought to you by a comics supergroup including writer Brenden Fletcher (Batgirl) and artists Annie Wu (Hawkeye) and Sandy Jarrell (Meteor Men).

I absolutely love the art for Black Canary and honestly kind of wish this was a real band. I’m particularly fond of each member of this crew and I loved that Vixen also played a role in this volume. Dinah was her usual badass self and I love how music was incorporated into this series. I had hoped for a little more story wise but overall a solid send off for Black Canary.

The spy stands alone.
Grayson must go rogue from all his former allies, find the truth within the web of lies, and take down Spyral once and for all. But with one of his closest allies now his greatest foe, Dick Grayson will have to make his greatest sacrifice to save those he loves.

Finally the Grayson arc has come to an end. One of my favorite DC characters puts an end to his spying days and there is plenty of action and adventure in this last volume. Dick stayed true to himself and protected his friends to the end. This series just lacked cohesiveness and the finale was the same. I’m so thankful Nightwing is back for DC’s Rebirth. 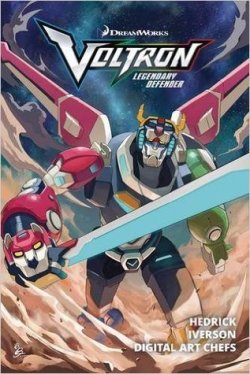 From days of long ago, from uncharted regions of the universe comes VOLTRON: LEGENDARY DEFENDER! When Team Voltron takes on a dangerous training mission in deep space, Coran, Princess Allura’s majordomo, is captured by an ancient enemy. It will take teamwork, smarts, and, of course, Voltron, to save their friend’s life. This galaxy-spanning adventure is a never-before-seen chapter of the epic animated series reboot by show writers Tim Hedrick (Avatar: The Last Airbender) and Mitch Iverson.

With my great love of Netflix’s Voltron: Legendary Defender I knew owning the comics was a necessity. I loved that this first volume provided an entirely new adventure placed within the timeline of the series. Each of the characters personalities shine through and on the page they are just as humorous, snarky, and kind. Even the story was perfectly fitting for the Voltron team. I adored it!

So those were the comic titles I’ve been reading recently. What comics have you picked up lately? Let me know in the comments below!